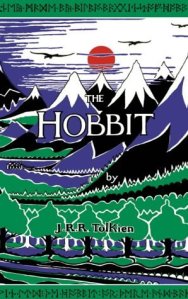 This September 21 is a bit different from others. It marks the 75th anniversary of a book so close to my heart that it’s fair to say I probably wouldn’t be the person I am today without it. I speak, of course, of The Hobbit.

I first encountered The Hobbit by not reading it. It’s almost shameful for me to admit, but it’s only true that one night while browsing through the video rental store (remember those?) I came across a copy of something few people know exists: the 1977 animated television movie produced by Rankin/Bass. I couldn’t have been more then seven years old and I immediately fell in love. To this day whenever I read the book, it’s that cartoon I have in my head. Which is easy to do because the movie is actually quite a faithful adaptation, with most of the dialogue coming straight from Tolkien’s original. Peter Jackson has quite a formidable task ahead of him if he wants to impress this fan!

To outline everything I love about The Hobbit would probably take a book in itself, so I’ll concentrate on three major elements:

1) The opening chapter. I’ve heard the opinion expressed that The Hobbit starts off slow and gets better, but personally I’ve never understood that. Consider the first paragraphs. “In a hole in the ground there lived a hobbit.” Tolkien then proceeds to tell us more — not about the hobbit, but about the hole that is his home and then his family background. From this description we glean a large understanding of hobbit culture through Bilbo’s character before ever we learn his name. Hobbits, and Bilbo in particular, resemble nothing so much as the society of the old English countryside. This sets us up wonderfully for the intrusion on this quiet little world by Gandalf and the dwarves, an intrusion that begins with a rather quirky extended joke on the meaning of “good morning”; how like a professor of language to poke fun at one of the most common phrases in the English language. And then too there is the comedy of the dwarves arriving in bits, growing in numbers until they literally burst into Bag-End like water from a broken dam. (There’s an echo of this later when Gandalf uses the same tactic to introduce the large group to Beorn.) The comic strain of contrasts between a quest for gold and an essentially English country squire continues throughout, but also softens its grip as we’re treated to one of the best poems in the book, as the dwarves sing about the Lonely Mountain and the wrath of the dragon who has stolen their home and treasure. I have never put down the book whenever I’ve picked it up to re-read and this chapter is the reason why.

2) Bilbo’s character arc. This is a bit obvious, since it’s really the point of the book. But Tolkien builds it expertly, with several moments showing Bilbo’s change as the narrative progresses. I haven’t finished this latest reading yet, so I can’t comment on specifics as much as I would like (I want to post this on the anniversary date after all). But the astute reader will notice several choices that Bilbo makes and things he says which both speak to how much he is changed by what happens and how he begins to have a greater hand in changing what happens to him. It of course culminates in his walk down the secret tunnel into the Lonely Mountain’s heart and a brilliantly written conversation with Smaug the dragon. And perhaps most importantly, the dwarves who were first intruders in his pantry end up as his closest friends.

3) Tolkien’s poetry. There are actually two kinds in this book: the obvious is in verse form and the more subtle is in prose. For International Book Week, I grabbed the book closest to me (it was The Hobbit), turned to page 52, and read the 5th sentence: “It was a hard path and a dangerous path, a crooked way and a lonely and a long.” Rather ominous, even in context, and a line I barely noticed as I actually read the chapter. But with its rhythm and tempo, with that casual dropping of the subject word at the end, it almost seems musical. Tolkien had an amazing talent for poetry as evidenced in his study of Anglo-Saxon literature and his translations of those poems. This talent carried over into his own original work, and one of the largest impressions that both The Hobbit and The Lord of The Rings leaves on people is the number of songs characters sing. Some hate it; others are merely bored. But they are some of my favourite passages in the whole of the Middle-earth canon.

The Hobbit is also more epic in scope than people give it credit for. It may be shorter than its sequel, but it is no less grand, and packs as much adventure into its pages as one could hope for. Tolkien wrote it to entertain his children and it must have done that in spades. A haunted forest; riddles in the dark; a giant dragon; a battle of five armies. Hobbits may be small; The Hobbit is definitely not.

I’m not the only one celebrating The Hobbit today. One very talented girl found a way to demonstrate her appreciation of Tolkien’s artistic ability and used his cover artwork (see above) to express her own creativity. You can see her results here. And though not strictly pertaining to The Hobbit itself, this artist has also done his own fantastic take on scenes from The Lord of The Rings.

The world is now eagerly awaiting the new movie version of The Hobbit from director Peter Jackson. Some are excited, some are horrified, and some are scratching their heads at just how he plans to stretch this story into a trilogy — the obvious and already-known answer is by using material from the appendices of The Lord of The Rings to flesh out more of the wider Middle-earth saga as it was developing during the timeframe of the original book, though it goes unseen there. These movies will certainly be sprawling and visually impressive; they may even be good. I hope they are, even if I am a bit unsure.

After we’re inundated with movie quotes, internet memes, and a world that is seemingly conversant in only one version of The Hobbit, I will certainly still have the novel to enjoy. I already read it with a movie in the background, as I mentioned before, so perhaps things won’t change as much as I fear they could. But before Hollywood has its say, I just wanted to tip my hat to a constant friend and companion on my life’s journey. And even though the story takes me on an exotic adventure to far off places, it always feels exactly like coming home.