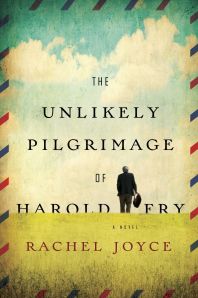 All books are journeys, really, with readers undertaking a pilgrimage under the author’s guiding hand to a destination they don’t know. My journey with this one began with high expectations, quickly settled into a depressing funk, then gradually sloped upwards to reach something beautiful.

The Unlikely Pilgrimage of Harold Fry by Rachel Joyce starts with Harold opening a letter from Queenie Hennessy, an old friend, who tells him she’s dying of cancer. Meaning to simply walk his pathetic reply to the nearest post box, the elderly Harold is inspired by a chance encounter to walk to Queenie and say what he can’t leave to a letter alone. It doesn’t matter that she is on the far end of the country, or that he has no proper hiking shoes, or that he’s left his mobile phone at home. What he has is the faith that walking will save Queenie’s life.

This is the kind of plot that has an easy hook to it. Stories about getting from one place to another are as old as the hills, or at least as old as Homer. Joyce does such a good job of keeping the momentum up that you can picture Harold with quite a brisk pace to his stride; his determination to not be slowed down or sidetracked is palpable that way.

Naturally the fact of travelling means that setting is more fluid, but unfortunately it also plays a lesser role in the novel. Harold’s journey is not that of a sightseer, true, and the focus is rightly more on the people he meets, but there’s no strong sense of really being anywhere either. Roads and towns are named, but descriptions are sparse and the atmosphere of places isn’t very strongly evoked. This might have something to do with Rachel Joyce’s career in radio theatre, where you must allow the listener to form their own impression of a location most of the time. But prose has different rules.

By far the novel’s greatest strength is the characters, at least with the central ones. Harold himself is given a well-rounded personality and his sudden urge to walk doesn’t feel contrived or forced at all. We get a powerful portrait of a man looking back on his life and remembering who he once was, regretting his failures, and struggling beyond belief to make up for them all through his pilgrimage. But of course Harold isn’t the only central character, nor is he the only one who takes a journey. He leaves behind his wife Maureen. They used to be in love, but now they sleep in separate rooms. While Harold is off walking, Maureen slowly begins to realize how much she misses him. Her awakening sensitivity balanced with his struggle to become a better man is the core of the story and it works beautifully.

I mentioned that my own journey with this book began with some disappointment. The first chapter or two was fine, but as the story progressed I started wondering if anything special was going to happen. The writing was sort of ordinary and didn’t necessarily pack a strong punch. But more seriously, none of the people Harold met were particularly interesting. None of the things he did seemed to matter very much. He never stayed in a place long enough for an impact to be made on the story.

But somewhere around the halfway mark, just when I was considering putting it down, the novel started getting better. Harold stayed somewhere; he paused in his journey just when the blisters and sore muscles were convincing him to give up. And suddenly someone he met got a name, a profession, a home, and became a character. It was as if the book was like Harold, both finding their walking legs at the same time. More characters showed up and coloured the narrative with their personalities and quirks, and with the way they responded to Harold’s quest.

The book became a better read the farther along it went, right up to the last page and an emotional ending laced with both tragic disappointment and wonderful hope. A place close to beauty is reached as Harold finds what he didn’t quite realize he had set out to look for. It reminds me of T.S. Eliot’s lines:

And the end of all our exploring
Will be to arrive where we started
And know the place for the first time.

While I can’t say it was the wisest bookstore purchase I ever made (a library borrowing would have been better for a first-time read), I am glad I read it. I didn’t start out loving it, but it won me over eventually. And that ending is surely going to stay with me for a long time to come.

One thought on “Journey To The Beginning: “The Unlikely Pilgrimage of Harold Fry””