He’s been called many things: the Man of Steel, the Last Son of Krypton, the Man of Tomorrow. He was the first of the costumed crimefighters and the basis for an entire genre of fantasy literature. His real name is Kal-El, or as his adoptive human parents would have it, Clark Kent. But to the world he’s best known by the name that remains blazoned over millions of comic books sold to this day. 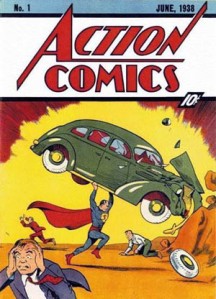 This April marks 75 years since Action Comics #1, Superman’s first appearance, was originally published (though the cover was dated June of 1938). Three quarters of a century is a long time to be around — and he shows no signs of going away any time soon. Not only is Superman responsible for the comic book industry as we know it today, he remains one of the cornerstones of that industry. He is iconic as the first superhero and the ultimate superhero.

Our love for Superman is strange, since he has his origins on a distant planet which has long since died. As many commentators point out, he represents the immigrant nature of American society, fleeing from destruction to arrive on the shores of a new world with hopes of a better life. And yet Superman rarely feels very alien. Raised by human parents — believing in fact that he is human throughout his childhood and teenage years — he has never lived anything but a human life despite his extraordinary powers.

He may seem otherworldly, but his story expresses the longing that all of us grow up with: that we will find our place. The young Clark Kent considers himself an outsider, a weird freak, unable to relate fully to others. The fact that he has to keep his powers secret doesn’t help. This is a theme that should resonate on a universal level. At some point we all need to discover just who it is we are and why we are here, in this place and time, in this life. We find ourselves feeling different and out of step and perhaps even feel the need to conceal some truth about ourselves behind a mask so that we appear “normal” and blend in.

Eventually Clark does find himself and his role in society, as our protector. Yet there remains something puzzling about him. In order to achieve this identity, he must take on a dual identity. Is he the mild-mannered reporter from Smallville who’s made it to the big city and falls in love with Lois Lane? Yes. Is he the great defender of Metropolis and the world? Yes. He was born to be Superman — but he was raised as Clark Kent. Maybe neither persona is truly his own. Maybe he’s never able to fully take off the mask that lets him function in society.

I think the mystery makes him the most honestly human superhero in the pantheon. Do we ever truly figure ourselves out? 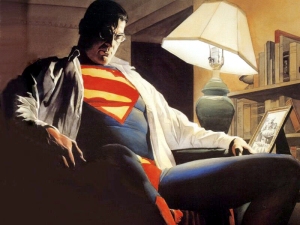 But for whatever humanness he possesses (and I would argue it’s a lot), Superman remains an idealized fantasy. Running faster than a speeding bullet. Packing a punch more powerful than a locomotive. Leaping tall buildings in a single bound. His comic was aimed at children, and they took to the dream like they always do. Flight, strength, and speed are the things we all wish we could have more of. Superman not only embodies that desire, he lets you imagine it’s possible.

And even with all his many powers, he never considers himself better than anyone else. Superman is more than a physical fantasy. He’s also a moral one. Secretly we know that if we had his abilities they would make us even greedier and more selfish than ever. Power corrupts, after all. But not Superman. He stays on the straight and narrow, walking in the path of light, fighting the never-ending battle for truth and justice without once giving up. Many times he expresses his belief that humans have within them the capacity for good, for strength, for righteousness. And he becomes a metaphor for the heights we hope we will one day achieve. They don’t call him the Man of Tomorrow for nothing.

His idealism may seem out of step with today’s cynical worldviews, but maybe that’s precisely why we still need him. Why we can’t give up on the hopeful optimism that Superman has always demonstrated. He arrived in our midst with powers and abilities far beyond those of mortal men, but also with the capacity for boundless inspiration to the ordinary comic book fan. Other heroes may inspire by overcoming their weaknesses. Superman inspires by demonstrating his strength of character. Others may forge their identities in tragedy. Superman forges his in hope.

That’s why Superman is still my favourite superhero, long after I’ve outgrown dressing up in a blue t-shirt and red cape to fight imaginary monsters. He’s bright and shining. He’s fun and good-natured. He is a fairy tale that, like G.K. Chesterton said, shows us not just that dragons exist — but that dragons can be beaten.

So here’s to you, Superman. May you always fly high. 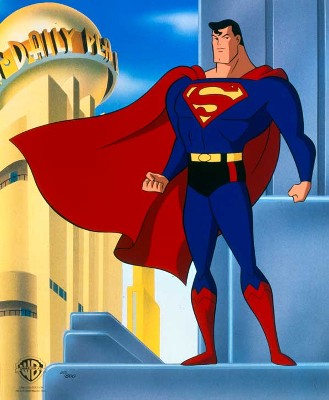