Perhaps you’re unfortunate enough to have never seen the BBC television show Doctor Who. Here’s a quick run-down for you: The main character is called the Doctor (and nothing else, hence the show’s title) who has a ship, the TARDIS, which can travel through both time and space, and thus anywhere in the universe. This allows you to tell virtually any story you can dream up, but what the writers like to do is stories where the Doctor saves people/Earth/reality from alien monsters or mad scientists. The Doctor is most often joined in his adventures by friends known as Companions, usually but not exclusively from contemporary Earth. The show’s longevity is partly due to the idea that the Doctor can “regenerate” himself and change his appearance, thereby facilitating the switch between lead actors.

Suffice to say you will probably find nothing else quite like Doctor Who. But like many a long-running franchise it has a lot of spinoff media, including novels — two of which I’ve recently had the great pleasure to read. 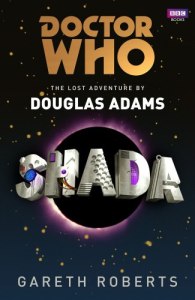 This requires a bit of background explanation. In the late 1970s, Douglas Adams (of The Hitch Hiker’s Guide To The Galaxy fame) became the script editor for the show which then starred Tom Baker as the Doctor. His last script for the show was called Shada, but due to a BBC strike the production of the story was halted and never resumed. This book is a novelization of Douglas Adams’ scripts by current Doctor Who scribe Gareth Roberts.

And what a romp it is. Because this isn’t really an original story (though there are some original bits added into it) one expects it to capture the atmosphere from that period of the show’s history — which it does very well, down to dividing the story up into six parts like the original serialized story would have been transmitted on television. But because this is words on a page, it also takes your imagination to visual heights that could never have been reached by the technological and budgetary limitations of the time. Somehow, I found those two realities coexisting peacefully in my head as I was reading, and didn’t notice it until afterward.

There are also some nods to the current version of the show. These consist mostly of phrases like “fixed points in time” which weren’t part of the mythology in the 1970s. I can’t decide if they effectively tie together disparate eras or serve as nothing but cutesy winks to the fans. You can take your pick. There were also references to watching television on Saturday afternoon (Doctor Who‘s traditional transmission slot) which I felt definitely tipped over into cutesy territory.

Another thing I found distracting: twice Roberts unusually decides to remind us that we’re reading something meant to be seen on a screen, and uses a formula like (and I don’t quote verbatim) “If you had been outside the TARDIS you would have seen…” before going on to describe a camera shot. Which is not the way prose novels are usually written. Odd, to say the least, and rather unnecessary.

No one familiar with his author credits would dispute that Gareth Roberts can write Doctor Who. Luckily, he can also write Douglas Adams. While it’s not fair to say he captures Adams’ style, it’s obvious he has the same sense of humour while still being faithful to his own style. And I consider that a great strength of the book.

Funny, exciting, and epic all at once. Shada is an endlessly enjoyable read. It’s even relatively accessible for people who haven’t seen the show, though there are some elements that don’t get full explanations as such. But then Doctor Who is probably best taught by osmosis anyways, so if you feel interested, give it a spin. You probably won’t be sorry.

The Wheel of Ice by Stephen Baxter

The second Doctor Who novel under review today takes us back in time to the 1960s, when the show starred Patrick Troughton in the leading role. A confession: Troughton is my favourite Doctor of them all. Fun-loving, eccentric, the smartest man in the room, strong enough to deal with anything, and gentle enough to be completely reassuring. So I came to The Wheel of Ice with a lot of expectation and hope — which sometimes leads to disastrous disappointment.

Not this time. It was everything I was looking for.

The TARDIS brings the Doctor and his Companions, Jamie and Zoe, to the rings of the planet Saturn in the late 21st century, where a mining station is extracting a rare mineral from the ice moon Mnemosyne. But who is behind the series of sabotages that threaten to derail everything? Are the sightings of strange blue creatures down in the mines merely hallucinations? And what is the source of the strange temporal phenomenon that the TARDIS has detected? It’s a giant mystery only the Doctor can solve.

Gareth Roberts, basing his novel on actual scripts for the show, arguably had an easier time capturing the feeling of that particular era of Doctor Who. Stephen Baxter’s job on the other hand might be looked at as more challenging since this is an original story. He largely succeeds and the novel is all the better for it. It’s clear that Baxter worked hard to convince you that the characters he writes are the characters from the show’s black-and-white days, their mannerisms and personalities intact. It was no challenge at all to picture the actors and their voices as I was reading.

This same care goes into the plot as well, which conforms very strongly to the “base under siege” trope that was common at the time; a confined place being attacked by a strange alien menace. It might sound like a backhanded compliment to praise a story because it’s stereotypical, but it’s meant with sincere affection from this fan.

There are places where Baxter gets more originality into the book. A subplot involves Jamie taking a trip to the moon Titan, and even the modern program’s visual effects budget and technology would have a hard time doing justice to the scope of the story at that point. There are also some “sneaky” references to events and aliens from later Doctors which occasionally felt out of place when coming from Troughton’s Doctor — though Baxter is careful enough to avoid giving the Doctor more knowledge than he really should considering where we’re at in the “timeline” of the show. And given that Baxter is one of the most respected writers of hard science fiction today, the book has considerably more scientific explanation than is usual for Doctor Who, past and present.

One of the key secrets in writing Doctor Who is mystery; plots are always full of things that only get revealed gradually as the story unfolds. So it was a bit disappointing to get a few things out in the open straight away in the book’s prologue rather than saving it for later (where some of it is actually reprinted word for word). It’s just about the only thing I didn’t like about The Wheel of Ice. Everything else made it a genuine page-turner.

This coming November sees Doctor Who celebrate its 50th anniversary, so there’s a good chance you’ll see some more about the show here on the blog. In the meantime I hope this pair of reviews encourages you to check it out if you haven’t already.