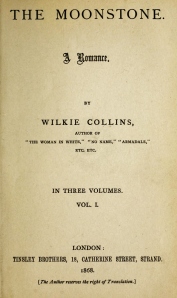 Edgar Allan Poe may have invented the private detective, but it was Wilkie Collins who brought what we now call detective fiction into early maturity. His 1859 novel The Woman In White introduced a format of the characters narrating their own viewpoints through the story, each contributing to the whole only what they witnessed or knew at the time. Collins would revisit this technique only once in his career. Often called the first true detective novel in English, The Moonstone has made its way onto the 100 Great Novels list as much for this notable honour as for its literary excellence.

On her eighteenth birthday, Rachel Verinder is bequeathed a precious Indian gem known as the Moonstone. But on that same night the diamond vanishes and the family is thrown into turmoil. Are the three mysterious Indian jugglers who linger at the fringes of the narrative responsible for the crime? Why did Rachel behave so mysteriously on the morning after the theft? And can Franklin Blake, Rachel’s cousin and suitor, find the answers?

The Moonstone‘s great strength undoubtedly lies in its characters, and in Collins’ remarkable facility for giving those characters unique and memorable voices. Gabriel Betteredge, head servant of the Verinder family, spins his simple country wisdom gleaned from years of relying on Robinson Crusoe as his own holy writ; Miss Clack, another cousin of Rachel’s, pronounces judgment on everyone but herself as proscribed by her hypocritical brand of religion; Mr. Bruff the family solicitor reports in the formal manner of a legal affidavit. They each reveal themselves as much as they reveal the twists of the story.

The plot of course is just the kind of exciting stuff we would expect from a Victorian thriller. A baffling mystery; surprise discoveries; an eerie atmosphere of the exotic (with that vague but polite racism so endemic to the era). Many of Collins’ novels have fallen into obscurity. Four of them are still widely read. One is the epitome of early mystery fiction. And that one is: The Moonstone.