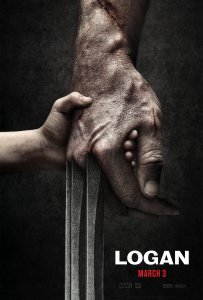 Everyone knows superheroes. They have an ethical code and boundaries they will not cross. They think of others before themselves. They have their flaws, but learn from their mistakes. Sometimes they lose their way, but they find the strength to rediscover their road. And they always save the day.

Logan, known as the Wolverine, is not a superhero.

He was born with extraordinary powers of recuperation, but they made him vulnerable to those who wanted to exploit them. He’s a Frankenstein monster created to be a weapon who then turned on his creator. When he walked onto movie screens in the summer of 2000 (portrayed by Hugh Jackman) we found him a hopeless wanderer, without a past and apparently without a future. But then he meets Charles Xavier (played by Patrick Stewart), an eternal optimist who runs a school where even Logan can learn to accept community and find a purpose.

It’s been 17 years since X-Men sparked the craze for comic book movies. While the craze shows no signs of slowing down, Hugh Jackman has decided that it’s time to step down from the role that arguably started it all.

It seems only fitting that here, at the end, he’s back to where we first found him: a man just trying to survive without a community or a sense of purpose. But in a way he’s worse off than square one. Now he has a past, which showed him what having that community and purpose is like — and what it feels like to lose it. All he has left is Charles, aged and suffering from a neurodegenerative illness that causes psychic shockwaves fatal to anyone in the vicinity. Yet even half-senile and decrepit he still clings to hope that life will continue, that the world will be better, and that Logan is a good man. It’s 2029 and in a world where mutants are all but extinct they are still complements of each other; the hopeless wanderer and the eternal optimist.

Thrown into their lives is a girl named Laura (Dafne Keen), who comes with a story about a place named Eden where the few mutants left can live in safety. Like Logan, she was made to be a weapon. Grown from his own genetic material, she also happens to be the closest thing he has to a daughter. What she didn’t inherit was his fatalism, and even with the enemy hot on their heels she’s determined to make it to Eden at all costs.

Hope is what propels the story forward. All three characters are burdened by a deep sense of guilt over their pasts; Logan and Laura are both hardened killers who want to be rid of the blood on their hands, and it becomes apparent that Charles was responsible for a deadly massacre through one of his psychic seizures. Eden, then, taken from the pages of a metafictional X-Men comic book, becomes more than just a destination. It comes to embody the desire for a better future, the longing for new life in the midst of death, and the faint hope that what we have done is not who we are. Because if our sins are not our identity, then there remains the possibility of forgiveness and redemption and the restoration of all that we have lost.

Which is probably why I found Charles’ death the hardest thing to watch. I nearly cried. A broken old man lying in bed, ashamed of his past unintentional crime, voices his own hope for forgiveness and peace. And just at this moment…he’s brutally murdered. It’s confusing and painful and we’re not sure just what’s happened at first. This has to be a dream. He’s having a nightmare and he’s going to wake up. The reality of it is almost too cruel to bear.

But of course it’s the other major death that most people are going to focus on.

It’s clear that the conflict being waged involves more than just the lives of our three heroes. It’s a fight for Logan’s soul as well. He chooses to worry about his own concerns before those of others. He fights against love and family and hope, dismissing them all as fabricated fiction, or at best a past that can’t be reclaimed. “We thought we were part of God’s plan,” he says. “Maybe we’re just God’s mistake.” But in the end his resistance breaks down when he realizes he will have to fight to protect Laura and the other children from the enemy that’s been chasing them — a fight that ultimately ends in his death. Hope comes with a cost.

Logan dies virtually in sight of the new world, with his daughter’s hand in his. And in that moment he is given the gift of a glimpse into what it means to love. “This is what it’s like,” he whispers. He’s always seen bad things happen to the people he loves, and now it’s the other way around. His sacrificial act, fighting to protect the future of mutants just as Charles taught him, enabling them to escape to the safety of Eden, is a bittersweet end to the many years he’s fought for his own survival. There’s a symmetry to it, but a tragic note as well. We want better for this man who so rarely realized how good he could be. We want him to have more than just a glimpse of peace.

He doesn’t have that, but thanks to him the children have a chance. Like a friend of mine said in his own review of the film: “Maybe it is more important to leave blessed people than to leave a legacy.”

Logan is a beautiful and touching story, as hard as it is to watch at times. For me this is the end of the series. I know there are more spinoffs and movies planned, but they seem like meaningless noise right now. Logan feels nothing like passing a torch; it’s an epilogue and elegy to a franchise that has always been a mainstay of the comic book summer blockbusters. It might point to those children who walk into the future, but it lingers by the side of Logan’s grave. An X literally marks the spot where the saga ends.

We couldn’t have asked for a more emotional conclusion.