The History of Tom Jones, a Foundling 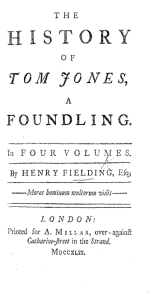 I haven’t written one of these reviews in quite some time. Let me see if I still remember how.

First, one interesting detail. This is the first book from my list that actually uses the word novel. Most of the time, Fielding satirically calls this work a “history”, but for a moment he makes use of a term that seems to have been then just coming into common usage. I can’t say it was the first time it appeared in print in English ever, but for the purposes of this list it comes close enough for me.

Together with this, there is also the effect of the narrator. Though it isn’t Tom Jones himself, with the many asides and prefatory chapters to each book (eighteen in all), it is hard to say the novel is written in the third person. Fielding gives us a nearly constant running commentary at every point of his story, from moral and ethical analyses of different characters’ points of view to the announcements that he will end his current chapter and begin another. The prefatory chapters are really short essays on literature, dramaturgy, and criticism in general. Fielding examines and explains the role of his own story on his readers even as he tells it. What we have here is a narrative voice that is so transparently a narrative voice that some critics have gone so far as to call him the main protagonist of the story.

But I think if I were to have any say in the matter (and with my relative inexperience with literature from the period I doubt I can claim any say at all), I would cast my vote for Tom Jones as the first true English novel. That is to say, it is the earliest I have read that is not only aware of its own power and limits as a narrative format distinct from those which preceded it, but also uses that power to great effect.

On the whole, I enjoyed the book a great deal. Fielding is not quite so harsh a satirist as Swift was, but he is possibly more charming and his wit keeps the writing fresh over such a large vista. The plot is at its core a simple enough love story with attendant complications, but Fielding takes the action on the road and the story becomes almost a straight travelogue for a large part of the middle. A modern editor might insist on removing some of the more “meandering” passages, but despite the picaresque nature of the narrative there is nothing really wasteful. Jones meets characters again later, sometimes much later, and situations that seem random at the time can come to have a profound effect on future developments. It may have taken me two months to finish, but I was never bored or considered abandoning it for a moment.

Much more could be said about Tom Jones and its place in the history of the novel, or Fielding’s narration, or any one of a dozen topics that it presents itself to, but I think I will take the example of the author and declare before your eyes the end to this post.